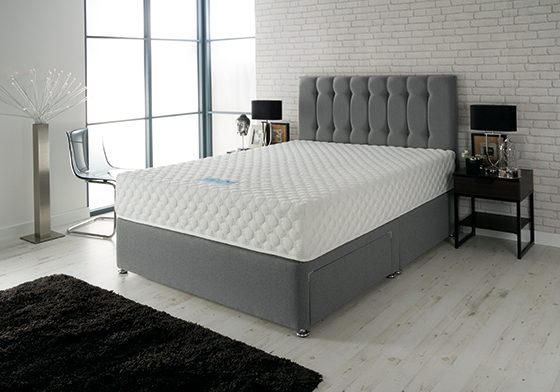 Innovation is the key word for Hush-a-Bye Beds. Last year’s Bed Show saw the introduction of a new gel infused latex range branded Coolwave®, and the revamped range will be launched at this year’s show. The original concept behind Coolwave was to tackle the inherent problem with memory foam mattresses, i.e. overheating. As Andrew Richards, sales director at Hush-a-Bye explains; “There are many gel infused memory products on the market, but starting with a ‘warm’ product and then trying to make it cooler didn’t seem to make sense to us. So we started with an inherently cooler product that offered the same pressure relieving properties and looked to make that cooler still.” Latex is a well-established material and has many advantages over memory foam. As Andy says, “We were convinced by  independent research that show that Coolwave latex gel not only absorbs heat more slowly than memory foam but also shows that heat and moisture penetration is reduced significantly. Added to that, latex recovers its shape considerably quicker than memory foam.” The Coolwave latex range has a completely fresh look for 2015, and the rest of the range has also been enhanced with a new range of non-turn mattresses, all featuring pillow tops.

The major innovation for Hush-a-Bye this year is the ottoman bed. Over the last few months, this model has undergone a stringent safety process with FIRA, as Andy explains, “There is obviously room for improvement with the standard ottomans that are on sale in the UK today. Our in-house NPD team devised a new model and worked alongside FIRA to address these safety issues. We were delighted when FIRA came back saying that the thorough risk assessment conducted by FIRA ensured that it is one of the safest products of its type on the market.”

Overall, it is looking like a busy show for Hush-a-Bye, Andy concluded, “We have always been proud to support the ‘bricks and mortar’ retailers and we hope they will be excited to see the exclusive innovations that we are bringing to them.”